What got you into music (mainly Jazz)?

As I grew up in a creative household, I was able to experience, experiment, and express myself in a variety of ways, including sketching, painting, and reading, but I seem to have gravitated toward music the most. My parents both play instruments; my mother grew up playing classical piano, while my father grew up playing jazz, and they all like music…

Jazz is a part of Afro- American cultural diaspora, how do you think it has affected your life?

I believe it has had a positive impact on my life because it is who I am, the music is who I connect with, and for many African Americans, it was all we had back then to be able to freely express ourselves without fear of being persecuted because of the colour of our skin. Jazz, like Hip Hop, was our thing; they couldn’t take it away from us; they were the outlet for our feelings when we were oppressed, and we found ways to be a part of it. Fast forward to myself, I was drawn to it since I enjoy creating and have been fortunate enough to do it since I was a child.

Why did you choose jazz over hip hop?

It’s all the same to me, just various methods of doing it. Whether you wish to use your own words, rhyme, or perform an instrument, you may do so. They are all linked. Hip Hop is the progeny of jazz, and without it, hip hop would sound considerably different than it does now.

Your take on the origin of jazz?

It wasn’t even named jazz at first; that label was coined afterwards. The tyranny of black people in America inspired the music since we couldn’t be a part of anything, and music was our method of letting it all out. We used to go to particular food joints or underground areas where we could be our African American selves without fear of being prosecuted; they were in the slums and ghettos because that’s where the white people didn’t go, so that’s where it started. IT would draw influence from classical music because that was what was accessible, but it also had African origins that were disguised since we couldn’t be in a classical orchestra. We weren’t permitted to be a part of anything we weren’t allowed to read during slavery, so we produced our own versions of anything we could obtain, just as in music. That’s how a completely new emotional and musical style emerged.

What has been the most difficult part of your musical journey?

There hasn’t been any issue because it’s who I am, and I say that in the most modest manner possible because every day is a learning experience, and we put our lives into music and music into our lives, and we learn something new every day. There have been challenging days, but this is my daily existence.

How did this trio form?

I’ll start with Phillip. I met him two years ago in New York City while he was in Julliard. I heard him around city and we had the chance to perform in someone else’s band, and I really loved him. Fast forward to this tour, the bassist I normally play with couldn’t join us, and it’s extremely difficult to replace the shoes of Yasushi Nakamura, so the only person I could think of was Phillp Noris, so this is the first tour we’ve ever done in the two years we’ve been playing on and off. And then there’s my brother Ryan, with whom I’ve been playing music since he was born, which I’m glad for because it’s never been difficult. Professionally, there have been disagreements, but at the end of the day, we are family, and he is also my best friend.

Which piece are you the most excited for tonight?

To be honest, all of them since every time we play is an experience. It will be an amalgamation of originals and standards.

What is something you’re looking forward to tonight and your Europe tour?

I’m just playing for the people and feeling what they’re experiencing because this is a journey we’re all on together.

Which is one artist you want to work with in the future?

Rosalia is the one person I’d love to sit down with and produce music with. She’s incredible; I adore her music and how great he is. 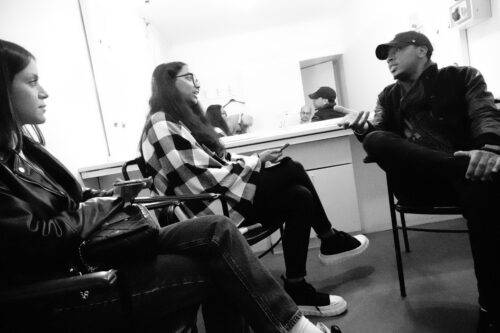